Meet Me in Saint Louis, Then Off to Arkansas

In the third installment of Rolf’s architectural tour of America, he and Stevie make a brief stop in Saint Louis before continuing their journey southwest through Arkansas and the Ozarks. Here, they encounter world famous landmarks and discovers some hidden gems along the way.

From Columbus we traveled through rural Indiana and Illinois towards St. Louis. The countryside is varied and hilly, not unlike Vermont in places, and reveals extensive farm meadows that dwarf New England’s agricultural lands. It’s easy to understand why farming as we know it is changing. Beautiful landscapes though, that leave one to wonder why we’re so biased about our own state.

Stevie discovered a viewing platform in East St. Louis created by the efforts of Malcolm Martin. Martin wanted to preserve the view to the St. Louis Arch from the opposite side of the Mississippi and did so by funding a park and platform from which to do just that. Splendid spot, thank you Malcolm.

The arch is a fine work of architecture and engineering, a piece equal to the Eiffel Tower and the Statue of Liberty. One of Eero’s finest works, a tribute to America and our trek west. 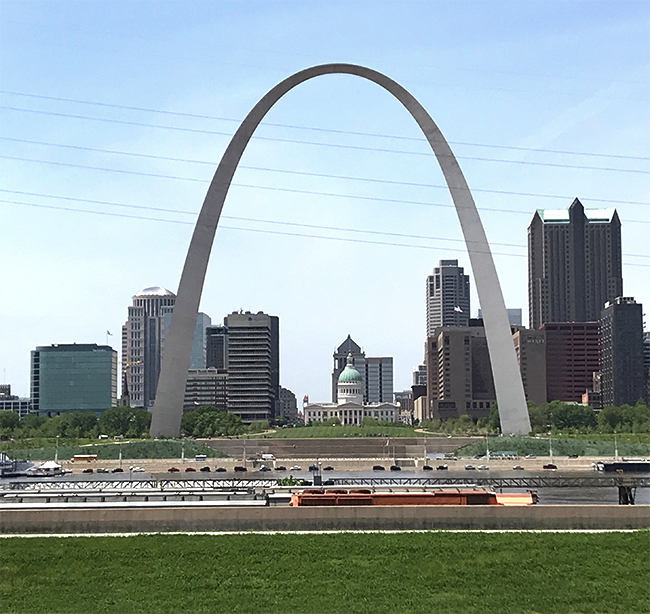 That was but a short stop and on we pressed to southwest Missouri and into the Ozark Mountains of Arkansas. This is beautiful country and we passed over hill and dale, lake and river to Eureka Springs, home of Thorncrown Chapel by architect Fay Jones. Jones, a professor at nearby Arkansas University School of Architecture, was retained by a man named Reed to design a small chapel in a rock-laden wood. 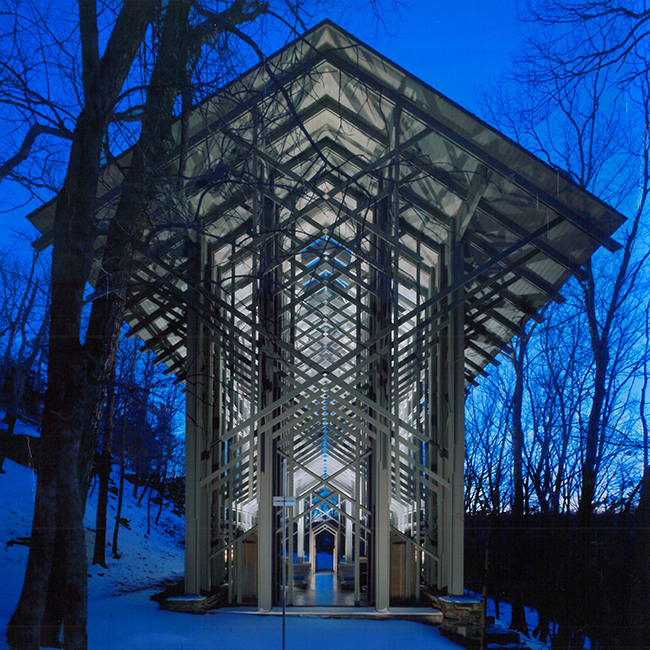 That lacy chapel is a remote pilgrimage for multitudes of architects and believers in the firm relationship between man and nature. Wright may have influenced Jones in this direction, but the design execution is exquisite, beyond Wright himself.  Light wood framing combines with a stone base and multiple glass planes to create sublime architecture. Numerous accolades have been heaped on this simple little structure. It embodies our relationship with the natural world. It is of that world. Go feel this building and it’s setting if you can. 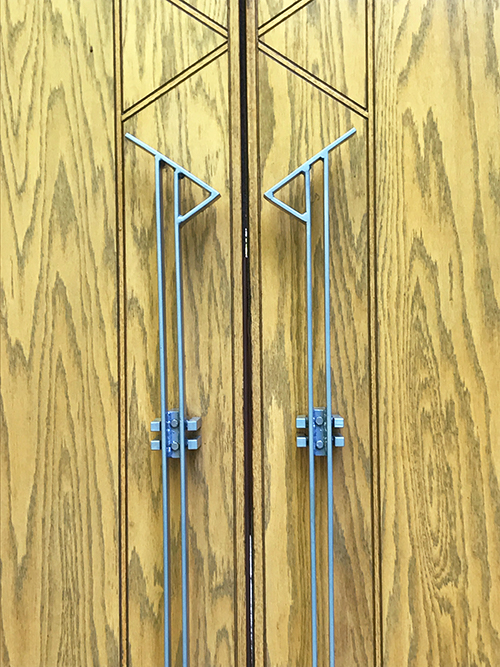 That bit of architectural oxygen brought us to the American Art Gallery created by Alice Walton of Walmart wealth. The generous Ms. Walton hired Moshe Safdie to design a museum for the American Art she had collected with the help of my former Art History Professor John Wilmerding. Together, they chose to site the museum alongside a body of water, a little like the industrial structures of old Arkansas, placed to take in the energy of the flowing water nearby. 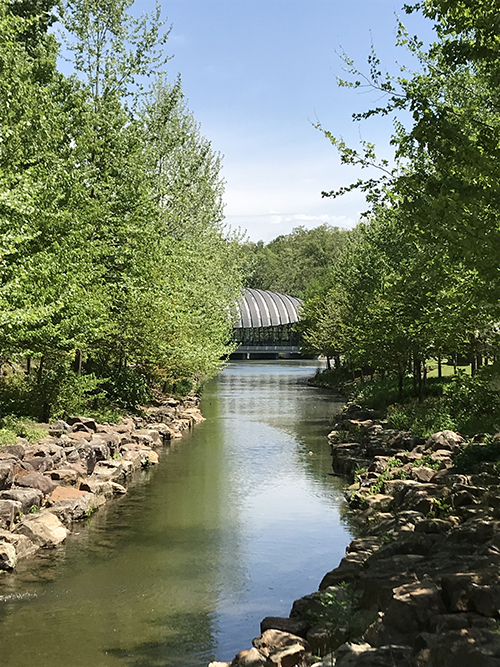 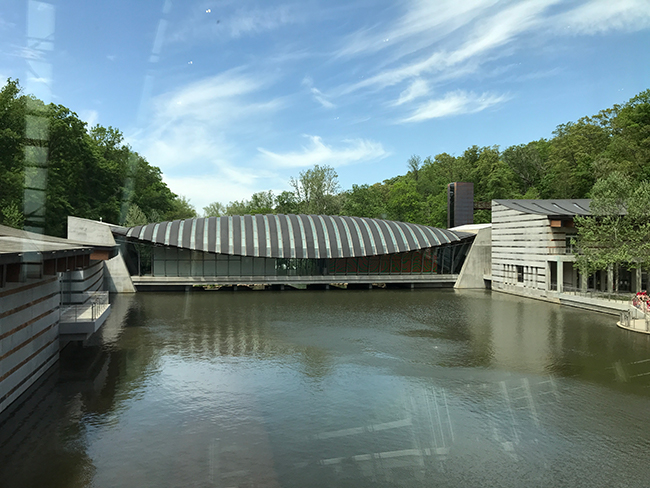 Safdie spoke much as Jones did. A merger with the natural world is what he sought. But todays museums are no easy building project and quite unlike a simple chapel in a wood. It’s perhaps understandable, but Crystal Bridges Museum edges toward the self-conscious. Its extravagant effort lacks the pure dignity of the chapel in the woods. Jones is a hard act to follow especially if you state “out loud” that that is what you are trying to do. I think what we have in the end is a kind of rural Louvre along the Seine. That’s perhaps a sturdier metaphor for this very generous museum. 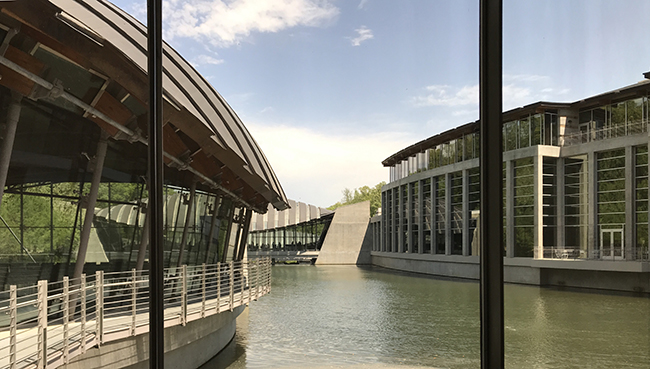 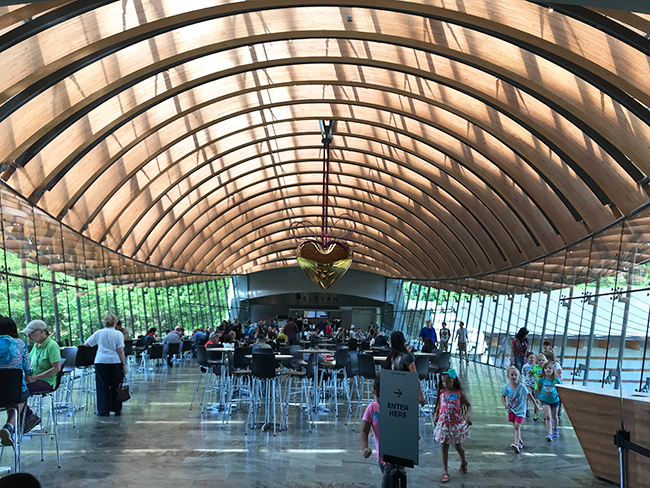 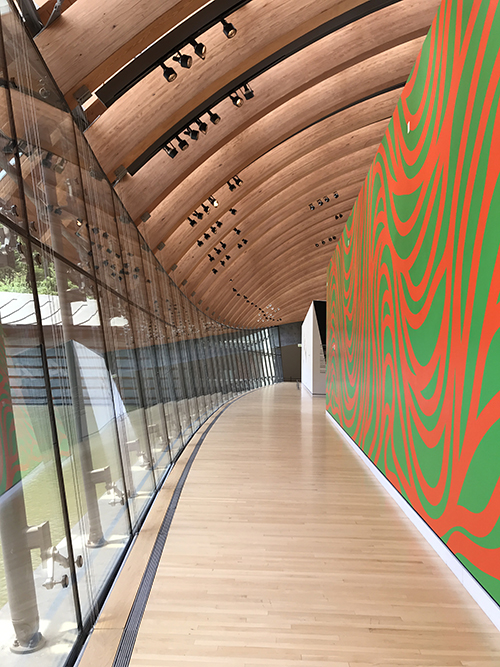 Some have jealously derided the placement of such wonderful American Art works in the middle of the country …. Especially at the extravagant hands of one of America’s premier merchants. Not my sentiment and instead I’ll say that the selection, the display,  and the educational merit of the works are without equal. America, its history by its art, is laid out before us and it takes the viewer on an exquisite journey from our founding to today. And admission is free to all. I think I’d come all this way just to experience that work … and I guess I did. 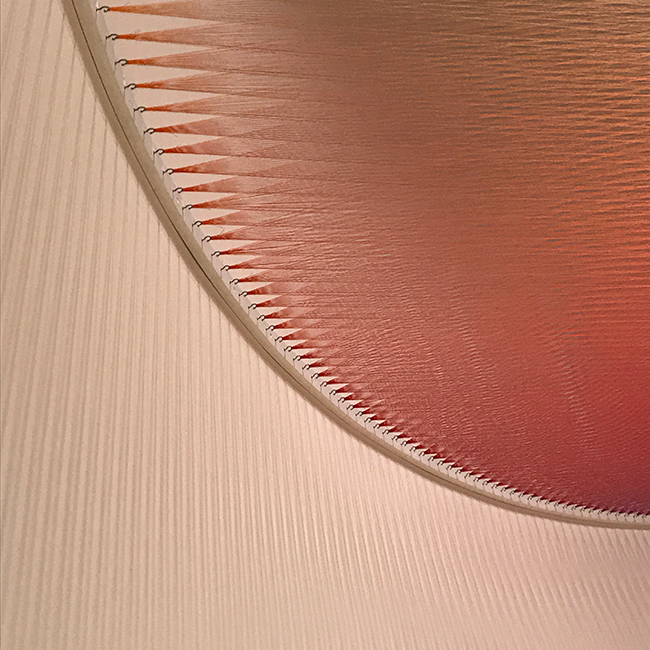 Plexus No. 27 | Sculpture crafted out of thread by artist Gabriel Dawe

A recent addition to the Museum’s collection is a Usonian House designed in the 1950’s by Frank Lloyd Wright.  Originally situated in New Jersey, the oft-flooded house (at one with nature?) is very similar to the Zimmerman House in Manchester, New Hampshire and was moved to a secluded spot near the Museum, piece by meticulous piece.

While not entirely a pure, restorative work, the presence and siting of the house is an act to be celebrated and the low-slung structure seems quite at home here. The house is beautiful, simply organized and not extravagant in any spatial or decorative way. Like many of these egalitarian houses, it’s organized on a four-foot grid and that dimensional consistency adds to the calm one feels throughout this modest structure. Many architectural lessons to be had. 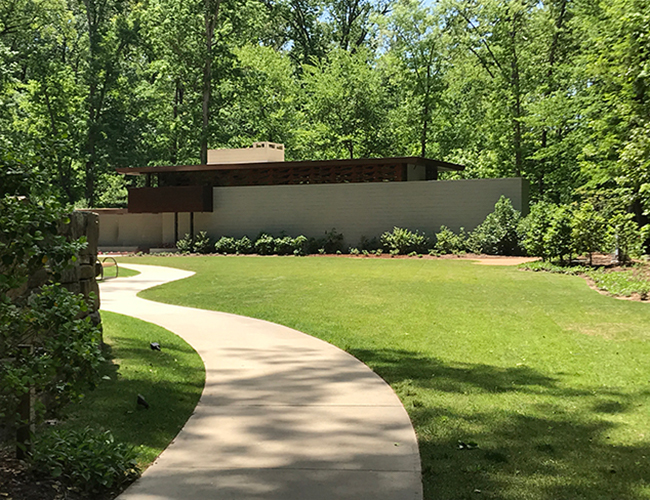 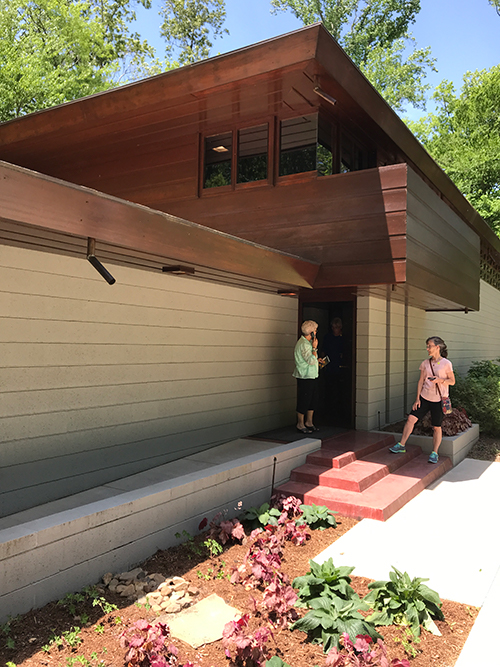 The Museum sits astride a small creek and via a short park trail links directly to downtown Bentonville. This is another one of those “perfect” company towns with ordered streets and ample urban resources brought out by the largesse of the Walmart Company founded here in the sixties. The street environment is well done. Restored and contemporary structures sit side by side in relative calm. A little like Columbus but slightly more fictionalized. They need to improve the ice cream in the local shop but otherwise … a worthwhile destination. Missing those Vermont creemies!