Today we are opening the archives to share some projects from the very early days of TruexCullins.  For this first ‘Flashback Friday’, we dug out some vintage photos from the making of the Church Street Marketplace.
This summer marks the 40-year anniversary of the first demonstration project on Church Street, when, in 1971, the busy street was temporarily closed to traffic to test the feasibility of a new pedestrian core for Burlington’s downtown.  The project was the brainchild of Bill Truex and a small group of Burlington’s civic leaders, and the success of the event led to the active planning and design of the project over the following decade. 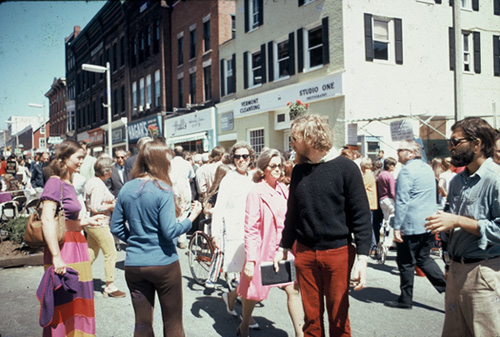 Bill developed the first design concept in 1975.  A two-level scheme was considered in 1978, with open courtyards and bridges connecting two levels of outdoor retail space. 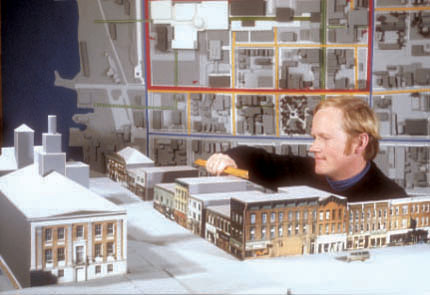 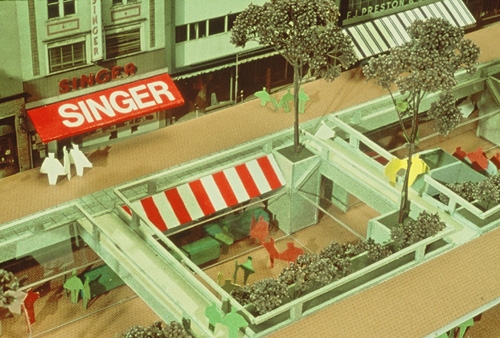 As originally conceived, the Church Street Marketplace was to be a four block pedestrian space anchored at the south end by City Hall and City Hall Park and at the north end by an iconic, early 1800’s Unitarian Church. The four blocks were the heart of commercial Burlington, with a diverse array of shops and second floor offices and apartments. The initial phase closed vehicular traffic for only the center two blocks, but the success of the space ultimately resulted in the closing of the north and south blocks as well. Several new parking structures were planned in conjunction with the Marketplace, and the transit loop provided public transportation to the center of Burlington. 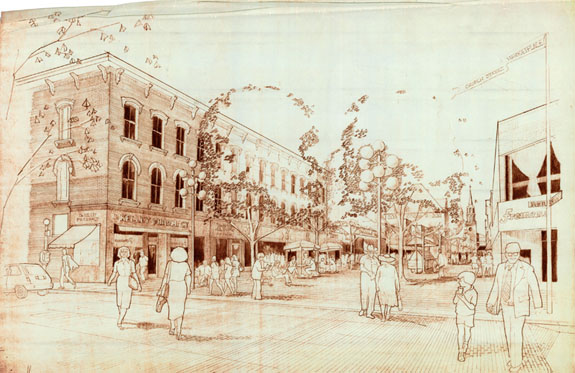 Substantial completion of the marketplace occurred in 1981.  Today, 30 years later, the Marketplace continues as the civic and commercial center of Burlington.
It is not without some irony that today we also celebrate the 41st annual Earth Day.  While not explicitly an “environmental” project, the Marketplace is in actuality a fine example of environmentally sound design practices.  The space has effectively reinforced the public realm of the city and functions as an extremely active space day and night, throughout the year. Pedestrian traffic and amenities have been established, encouraging citizens, students and visitors to forgo their vehicles and move about on foot and by bicycle. The space is accessible to those in wheelchairs and children are free to roam and play amongst the rocks and seating areas.
In 1997, the National Trust for Historic Preservation granted its Great American Main Street Award to the Church Street Marketplace, and in 2008, the Marketplace was honored by the American Planning Association as one of the 10 Great Public Spaces in America.  Bill Truex’s vision for the project lives on, with its positive impact on the environment of our city. 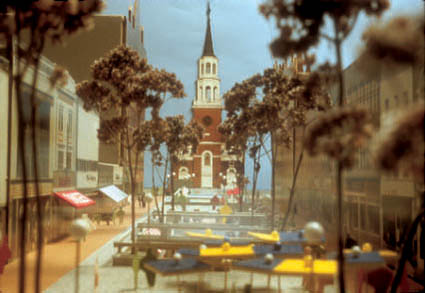