A House for David

Many of us love this work: the people we do it with and the clients we do it for. We are heartened by the built result and the encouragement of our peers, clients and collaborators. This story is one such highlight, an odd pat on the back. It goes like this… 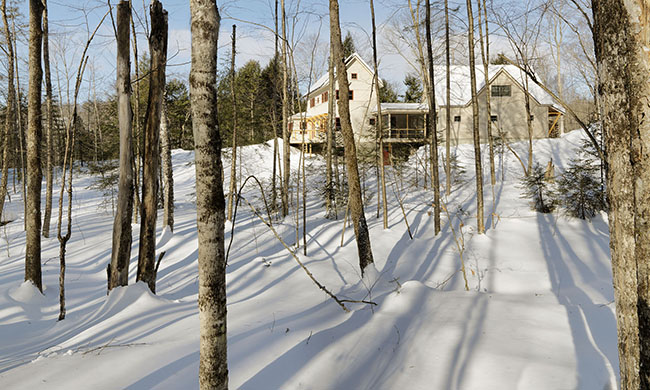 In the mid-eighties I was called by a man from the mid-west, a planner in a large city who owned a scenic property in central Vermont. He’d seen a house of mine and “wanted one just like it”. I was a bit flustered and started to explain the import and influence of site on a structure’s form and expression but stopped mid-sentence when I realized that would all come around in due time.

David, as I’ll call this man, met with me soon after. His house was to be a holiday house for now, but long term, he planned a move back to his native New England to situate permanently. We started work. He was very enthused. His wife, Harriet played a sideline role. She seemed less enthused but went along.

The design progressed nicely. David was a wise and perceptive client who still possessed that child-like enthusiasm we hope for. At some stage during the design process David asked innocently, “when was I going to construct one of those nice concise models” that littered my office. His timing was right on as I’d already begun such a model. When complete, he was thrilled with the outcome and treated the model as a kind of jewelry piece. He asked if he could take it with him. Of course. Harriet didn’t know what all the fuss was about, but still went along.

David was a fine craftsman in his own right and when next we met he had created an exquisite wooden “container” to safely transport our little model. The box had a fine leather handle. It was a more-than-worthy carrier for our mini-house. He was thrilled and in schoolboy-like fashion, carried it about for all to see.

In time, David’s house was constructed and, true to plan, he and Harriet moved east and became permanent Vermont residents. We’d see each other from time to time. We were both people who “stayed in touch” and besides, we liked each other.

Winter, a year ago, I got a call from David. He was very sick and not likely to live long (he was approaching eighty). We met up. The conversation was remarkably upbeat, true to form for David. Not long after, Harriet called with sad news. David had died. He’d been cremated. The service was more a celebration and was to be held in the late summer. August came, and I went. A happy and sad event. It reflected David’s view of life and the people he loved. No burial, just a gathering on the lawn of the house we’d made together.

During the event Harriet took me aside. She had a story to tell me, a story she thought I’d enjoy. After David’s death in late winter she had hired a local craftsman to construct a wooden box to hold David’s ashes. This box was to be buried on their land, not far from the house.

On a rainy July day, Harriet and a helpful neighbor were cleaning in the basement and they came upon the box that David had made to hold his house model. The neighbor, without hesitation, advised Harriet to call off the local craftsman and save the cost of making a now, unnecessary box. They could use David’s box to hold his ashes … How fitting that seemed.

The two ladies opened the box, and lo and behold, the house model was still inside.

“I don’t think that’s necessary,” said the neighbor. “I think the ashes and model would fit quite nicely together.”

And so, it was done. David’s dusty remains mingled in with the “house” he had loved.