The Architecture of Happiness 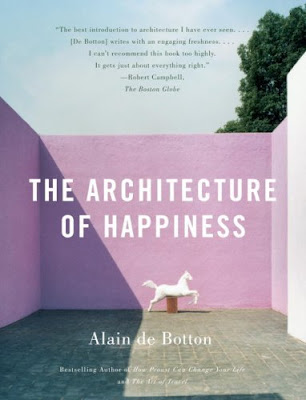 There is one book that has been making the rounds at our office, adopted as a sort of unofficial guide to architectural style and beauty. It has been recommended at office gatherings, shared between coworkers, and gifted to interns when they leave our firm to prepare for the next stage in their design career. This is The Architecture of Happiness, by the Swiss philosopher Alain de Botton.

The book is built on the premise that our moods are directly affected by the nature of the furniture, buildings and streets that surround us. In fact, we are influenced so much so by our built environment that it actually shapes us into the person we become. You may recognize The Architecture of Happiness from the feature role it played in the 2009 boy-meets-girl movie 500 Days of Summer. The book was favored by the film’s protagonist, a young architect-in-training who eventually gives it to his elusive love interest, the quirky hipster played by Zooey Deschanel.

Just as these two were searching for true happiness in life, De Botton sets out on his own search in the pages of this book, exploring the history of architectural style and uncovering what it is that makes a building beautiful. The answer comes into focus about a third of the way in, when De Botton quotes the 19th-century French writer Stendhal in saying, “Beauty is the promise of happiness”:

His aphorism has the virtue of differentiating our love of beauty from an academic preoccupation with aesthetics, and integrating it instead with the qualities we need to prosper as whole human beings. If the search for happiness is the underlying quest of our lives, it seems only natural that it should simultaneously be the essential theme to which beauty alludes. … To call a work of architecture or design beautiful is to recognize it as a rendition of values critical to our flourishing, a transubstantiation of our individual ideals in a material medium.

This is the main argument of the book.  When we think of a building – or a chair, or a door, or a fence post – as beautiful, it is because we see in it the promise of happiness.  Or to put it another way: the promise of living the good life.

So how is a set of human ideals translated into the abstract artform of architecture? In the past, it was easy. You would follow one of the classical orders, with precisely tapered columns and carefully proportioned pediments. It was all thoroughly prescribed in the widely accepted books of architecture by masters such as Vitruvius, Alberti and Palladio.

Later, in the 20th century, the science of engineering eclipsed the master Architect. Minimalism and functionality ruled the day. A bridge was seen as beautiful if it made a graceful span with the lightest of materials, without any extraneous ornament or decoration. The prevailing belief was that for a structure to be honest, it would perform its mechanical functions efficiently.

This philosophy was promoted by the Godfather of modernism, Le Corbusier, and epitomized by his most notable residence, Villa Savoye. The fact that the roof leaked incessantly and rendered the place inhabitable did little to affect the architect who famously professed that a building was a machine for living.

From here, De Botton presents a different perspective which is not restricted to the tenets of classicism or modernism. His argument is that the beauty of architecture manifests itself when a building communicates the idea of happiness. But how does this happen? It may be anthropomorphic – when buildings exhibit an often literal representation of a living form – or psychological – when the human spirit itself is interpreted in bricks and mortar.

Examples abound. The rounded arches of a Roman loggia convey serenity and poise, while the pointed arches of a Gothic cathedral speaks of ardour and intensity. “We can be moved by a column that meets a roof with grace, by worn stone steps that hint at wisdom and by a Georgian doorway that demonstrates playfulness and courtesy in its fanlight window.”

De Botton goes on to describe the virtues of buildings that facilitate this conversation: order, balance, elegance and coherence.

The Architecture of Happiness is organized as a sequence of ideas which eventually build into a recipe for reading our built environment. In the end, De Botton presents examples of contemporary architecture from Japan, Switzerland and the Netherlands that embody many of these characteristics. These buildings succeed in carrying the valuable lessons of the past while leading us into a “restless, global future”. They respond to the past without being nostalgic. They adapt to the local vernacular while exhibiting a universal appeal. And now I know why they make me happy.