Traveling through parts of the United States is invigorating. Recently, TruexCullins Principal Rolf Kielman headed west from Vermont on his way to Texas. His journey was slow paced and most often on the “back” roads. His first stop was Buffalo, New York. Stay tuned for descriptions of his other stops in: Columbus, Indiana; Eureka Springs and Bentonville, Arkansas; Big Bend; the art community of Marfa; and the McDonald observatory, the latter three all in west Texas. Rolf’s trip concludes in Austin, Texas for the graduation of a son. 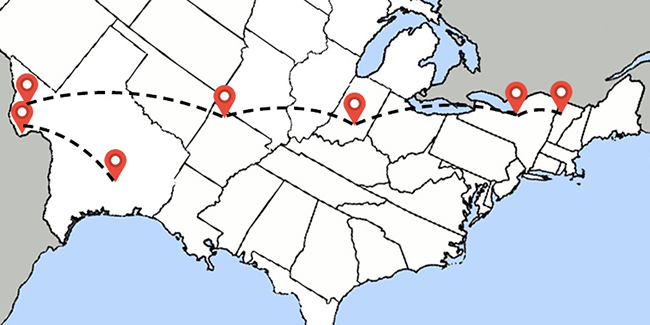 We’re on the road. Headed to Texas. Our excursion should cover several weeks. First stop, Buffalo, New York, is a return visit. I spent time here in the early sixties, dropping down from Toronto to row against Buffalo Westside’s, our friendly rowing rivals situated on a stretch of the Niagara River, well upstream of the Falls. Those were wonderful sporting events.

As with much of upstate New York, Buffalo’s been through tough times.  Its former luster is returning and the downtown is a vibrant cultural and commercial scene. We saw that 12 or so years ago when we strolled the iconic downtown buildings that made it easy to recall the glory of this once great, American City. In the mid 1800’s Buffalo was the frontier and quickly became a major American city. The Erie Canal provided a busy link to the east coast and to the western empire spreading through to the great lakes and the vast west. It was an exciting time for this young and energetic city. By the late 1800’s fabulous works were in progress and these are still to be seen today.

The city is down in population: 240,000 or so, but stable, we understand. There remain empty lots and excess infrastructure and more low buildings than one would expect. In places the city has a kind of “in town” suburban feel. That’s offset by a vast array of spectacular historic structures that served Buffalo well during America’s westward expansion. If you take the time to explore, you can feel the quality of this city.

From our base at the downtown Lafayette Hotel we took in the highlights. And there are many. You have the Darwin Martin House by Frank Lloyd Wright, now almost fully restored and gently accompanied by a new Toshiko Mori visitor center. The Martin House is a larger version of the Robie House in Chicago and it covers all the Wright bases. Strong horizontals, breaking the box with negligible corners, delightful connections to the exterior and, for it’s time, remarkably advanced technologies, that we today, are only just beginning to master.

Delaware Park, by Frederick Law Olmsted, is more modest than its bigger city counterparts, but still a vital part of neighborhoods in the north of the city. Olmstead’s reach extended into the adjoining neighborhoods, still being developed at that time. The slightly curved streets and abundant mature trees speak to his influence on these very livable parts of Buffalo.

The Garranty Building (aka Prudential Building) by Adler and Sullivan is one of their finer works and its adventurous steel frame (for the time) is clad in custom-made terra cotta tile. Sullivan’s natural themes are artfully cast into both the terra cotta and the various bronze components of the exterior and the interior. Spectacular work. And in the lobby, there is a very informative display describing the making of the building. 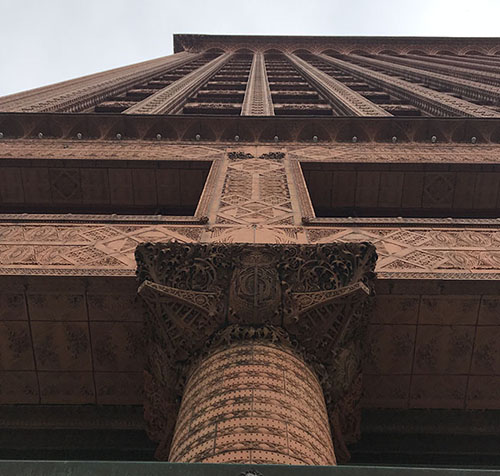 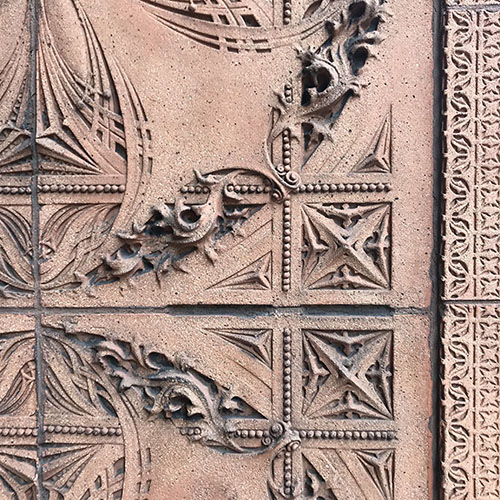 The art deco-style Buffalo City Hall is a proud and approachable work that is filled with thematic metaphors describing the city’s development and cultural history. Somewhat literal in places, but whimsy has its place. The view of the city in its setting from the upper floor is not to be missed and the ceiling of the Council Chamber is a riot of colored glass. 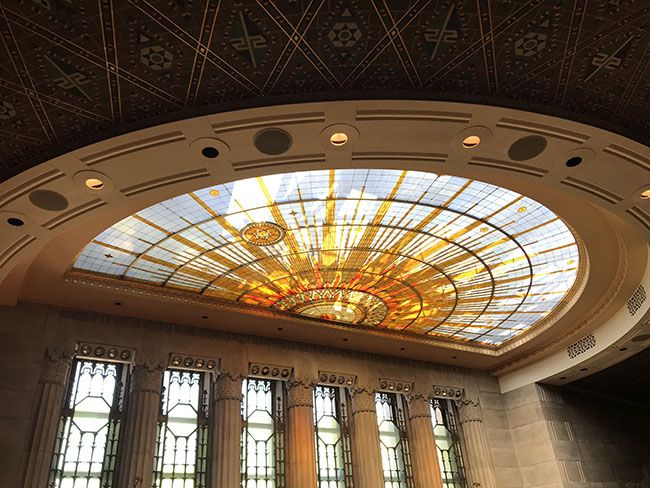 The Ellicott Square Building by another Chicagoan, Daniel Burnham, is an advanced 1890’s commercial structure that contains an interior, glazed court shared by all. These communal spaces (call them public living rooms) were established in Chicago with the Rookery Building and it’s the kind of space that is now, only found in museum lobbies, airports and hotels. The social benefit of these urban spaces is desirable, and the majestic interior courtyard contains a marble mosaic floor designed by Kent and Johnson. The 23 million pieces of marble on the mosaic depict sun symbols from civilizations around the world. The lobby of the Ellicott Square Building remains a favorite gathering spot for political rallies, weddings and social functions. In 1984 it was used for hotel scenes in the movie The Natural. 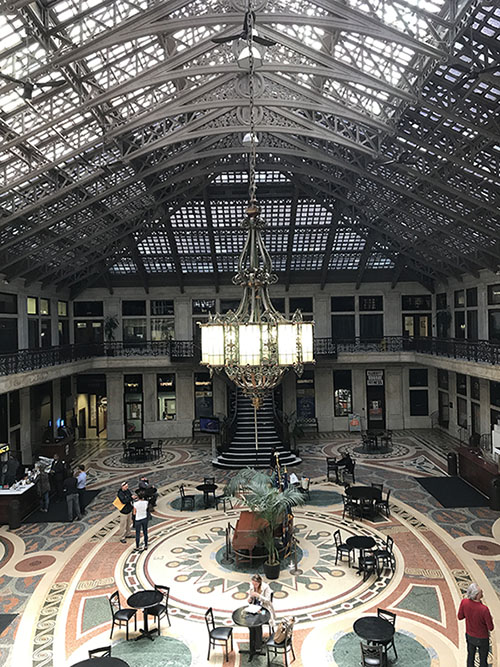 And speaking of shared space, look what we found on Buffalo’s Main Street?  The jewel-like, Market Arcade, a late, 19th century, glass roofed, commercial arcade that holds its own with any European arcade that I’ve seen. (Have a peek at Place Vendome in Paris) This is a special gem and a delightful precursor to the vapid malls that became prevalent in late 20th century America. Again, it’s a public “living room” of the highest quality and we hope it comes fully back to life. Oh, if we could have such spaces in downtown Burlington. 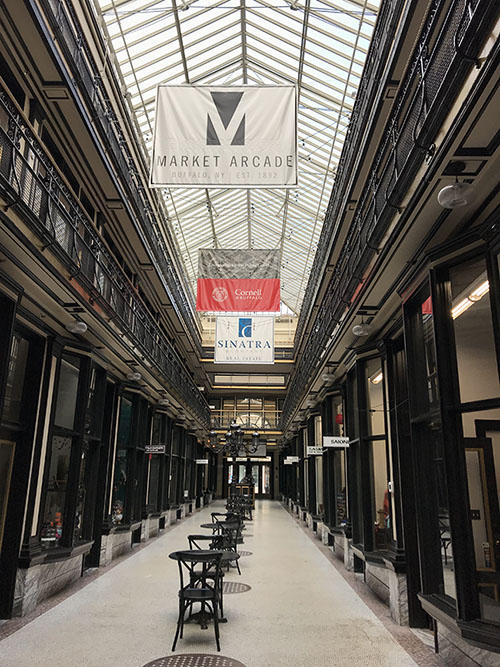 On one evening we rode north to take in Niagara Falls. That City is still lacking but extensive efforts have turned the falls edge into an engaging park, a park that fully gives all the opportunity to feel the power of this incredible natural sight. You are right there and it’s a mite terrifying. It’s now the Canadian side that looks honky tonk. 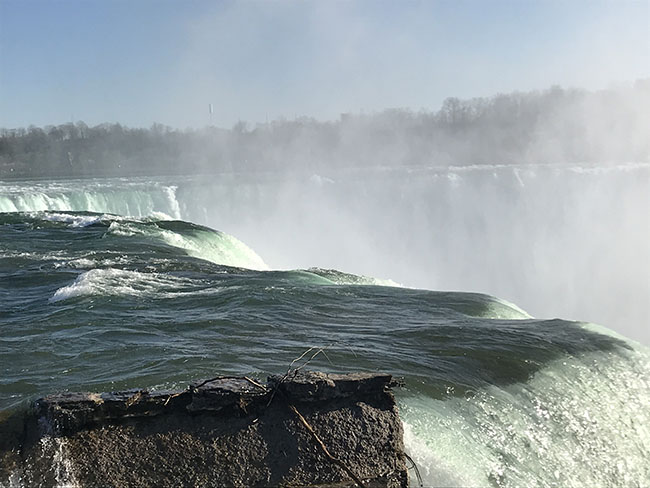 So, we love this city of Buffalo. We picked up a stuffed little version of the city’s mascot and piled it into the trunk for our new grandson. Two days of intense sightseeing and off we went.

ps. On a little side trip we strolled down to the Niagara River to take in the boathouse that had been designed by Wright. It was parked just next to our old rivals, the Buffalo Westside. A fine, horizontal piece of work that seemed, in form, to mimic the lengthy elegance of the racing shells stored within. 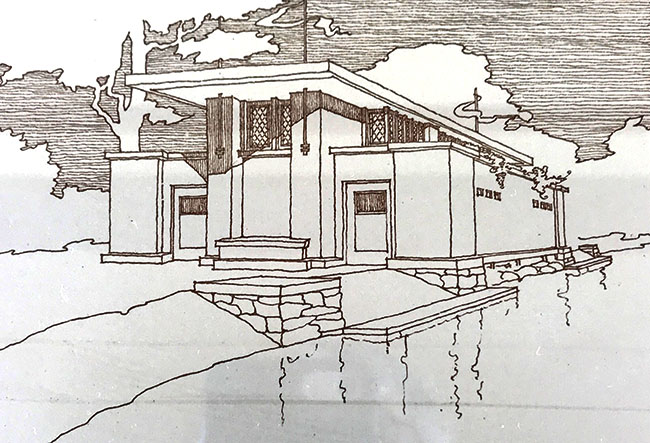 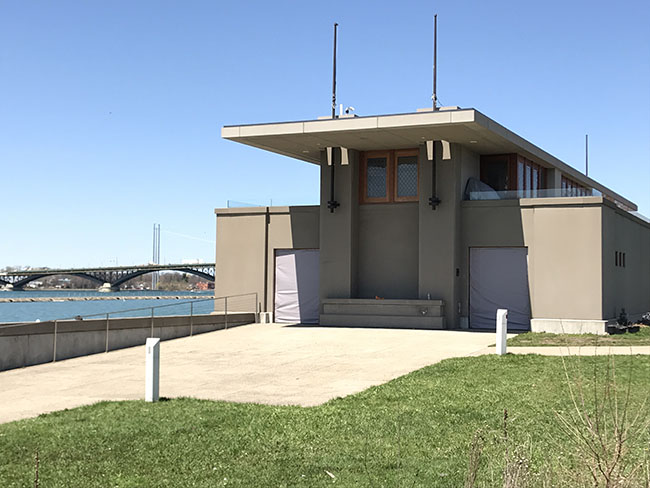