In the Summer of 2016, Burlington City Arts awarded a Community Fund Grant to Allison Cannon, a nurse at Rock Point School. Cannon’s project, “Imagining Home”, paired local architects with individuals who have been affected by homelessness – whether currently or in their past –  to design a home that would meet their needs.

The project was inspired by the housing-first approach to solving homelessness; if a person’s basic shelter needs are met, they can focus on other issues that may have contributed to their homelessness. Imagining Home combats the idea that a blanket solution can solve homelessness, and demonstrates that a diverse approach may well be best.

As a part of that diverse approach, follow Rolf Kielman’s description of the design of a house for Mitchell White: 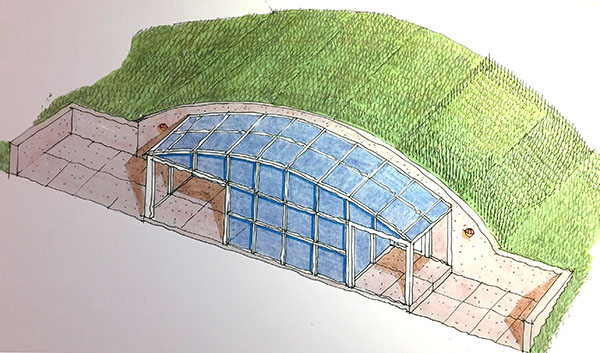 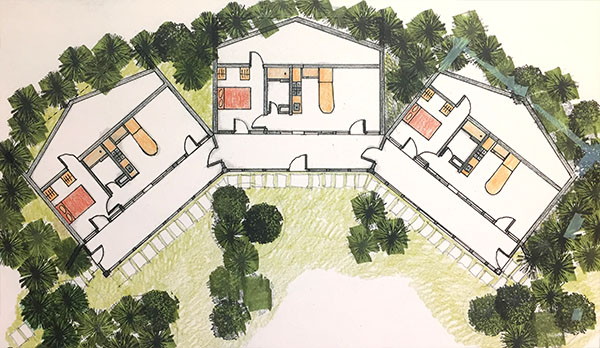 Mitchell White and I have been working together on the design of a house. His house. Mitch and I met four or five months ago as part of a project conceived of by Allison Cannon. Allison’s intent was to create a project that focused on housing needs for people who’d at times been homeless. Mitch was very enthusiastic about this project and he met with me weekly to discuss and draw what he needed in a home.

Mitch’s home was not quite what I’d expected. The design process too, diverged from my normal way of going about the design of a house for a client. But the result was satisfying in many ways. Rather than me designing a home for Mitch the “client”, Mitch ended up designing a home for himself. I was a sideline design coach.

You see, Mitch had at one time been quite a draftsman. He’d studied drafting in high school and developed a keen facility for envisioning what was needed in a home. And this was not just about a home for himself, but a kind of “everyman” home. He was determined to share his design with others whom it might possibly benefit. The design was also to be environmentally intelligent. Mitch wanted a home that was a gentle presence on the land. Few resources would be needed to operate the home he envisioned.

So we got started. It took a bit, but after several weeks I gave Mitch a portable drafting board along with scales, pencils and some mylar for drafting on. We discussed his vision of a one bedroom home, open to the southern sun but “buried” in large measure in the direction of other exposures. The earth was to roll over a gently curved berm. Gardens and vegetation would grow on the curved roof and the thick earth would shelter the structure from the harsh Vermont winters. To the south was a greenhouse, again to be used for plants and as a place to sit in the colder months. The structure as envisioned was to run itself with only modest mechanical assistance.

And Mitch was also determined to create a place that could expand and shape a community of sorts. He designed a structure that could be expanded around a south-facing courtyard, a kind of communal space for others who desired to live as he wished. In all, a well conceived but modest place for multiple people and families.

While Mitch created many of the drawings I set about building a small model of his house. I added a few touches to the drawings and before long we had a presentable idea that was to be displayed at our little office gallery along with the works of other teams of architects/individuals doing much the same as Mitch and I. Some remarkable products I’d say. The designed homes were by and large, practical, often small and compact and just as often close to the earth or readily mobile for transport to other locales. Here are a few examples of the divergent approaches people took: 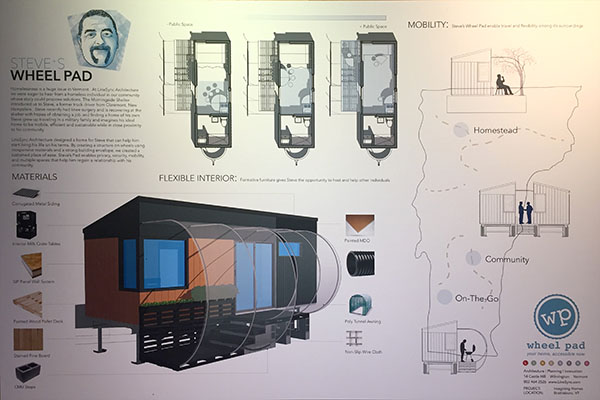 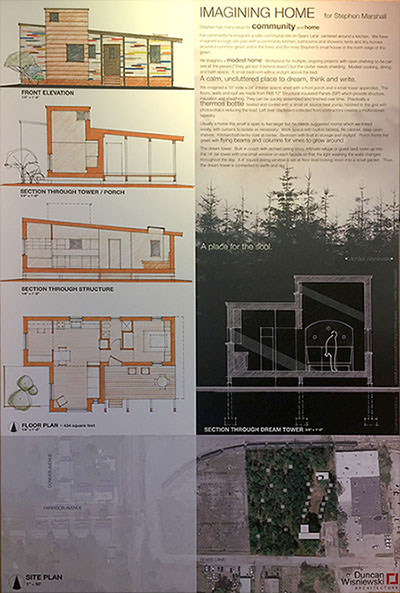 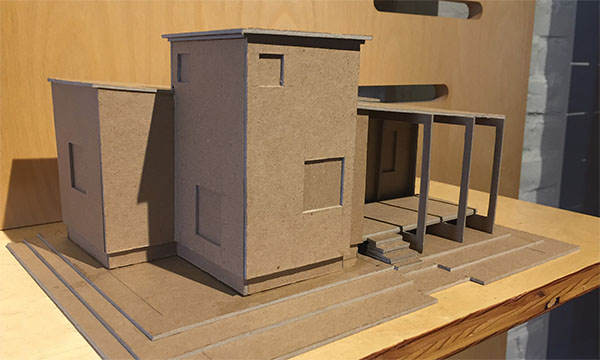 So with the display of the work at our office we had a little party and discussed the differing outcomes. I think we’ll do a modest publication that illustrates the work done and the ideas behind each of the homes imagined. Some would describe these as tiny houses, modest in their impact on the earth as well as the consumption of its resources. Some good lessons in these projects and those will find their way into the work that we do as architects.

As for Mitch, he’ll keep thinking about his house. We worked well together and I’m encouraging him to pursue studies in architecture and advancing his drawing skills, perhaps with a computer. I sense he might some day make this imagined house of his. I hope so.

If you have an interest, you can see the projects of the “Imagining Home” project on display at the following locations/dates:  We welcome your thoughts.