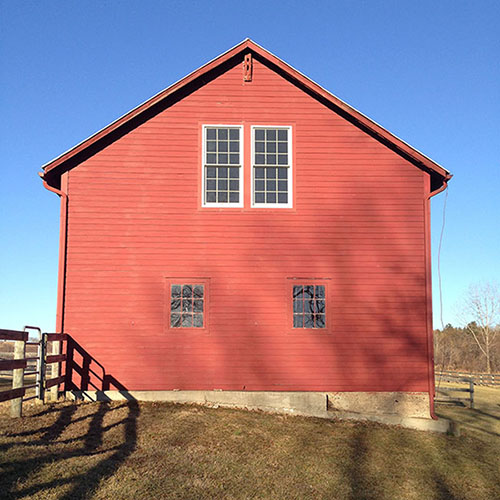 The classic dairy barn may be the most recognizable building typology in the northeast United States. These agricultural buildings punctuate fields and valleys, giving contrast and rhythm to the rolling landscape. The defining characteristics of a New England barn are based on utility and economy. Those who built the barns were often their owners and end users, so builders only constructed what was necessary to accomplish the tasks at hand.

The recipe is simple, and is intended to lower costs and save materials. Barns were typically built according to a rectangular floor plan with a simple gable roof. Some barns are painted red, the cheapest color a farmer could choose; though many barns forgo paint altogether.

Well-built from sturdy materials, many of these structures have survived countless New England winters, some still standing after a century. Barns of old were so well built that they have outlived the very way of life they were created to serve, but now they must evolve in order to survive. So, how do we respect these giants of architectural history while adapting them to meet our modern needs? 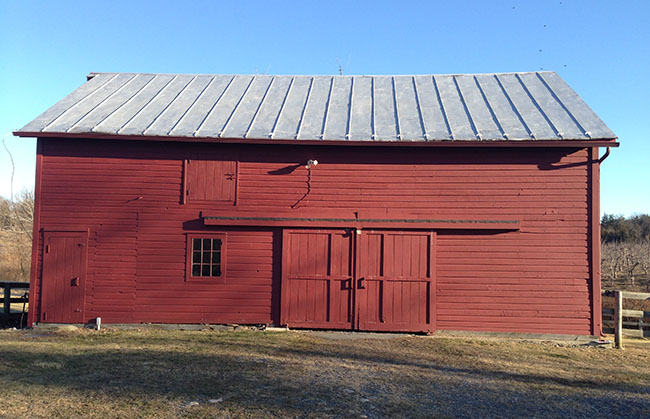 TruexCullins recently had the opportunity to redesign and rehabilitate a 19th century dairy barn in Hudson, NY.  Over the years, this humble 26′ x 44′ red, post & beam structure had been renovated and re-purposed many times. Originally serving as horse stables, the barn was eventually fitted with a loft level guestroom before slowly falling into disrepair. Most recently, this barn was purchased by an adventurous young couple with a vision.  They wanted to save the barn and give it new life as a home for visiting family and friends. 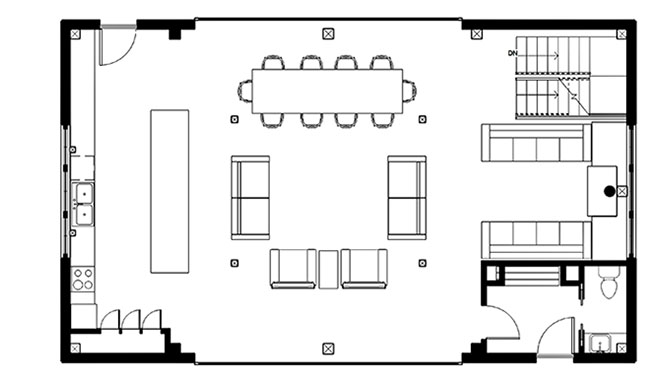 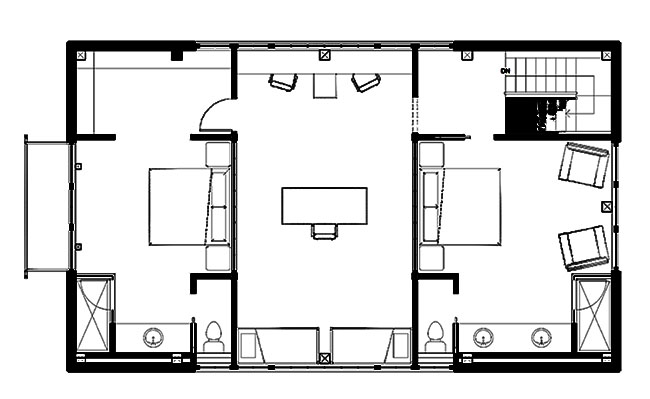 The first and most difficult question to answer before rehabilitation is if the structure is even worth saving?  Not every old building can be preserved: some fall victim to years of exposure, some are poorly built or situated, and some were just born ugly. Fortunately, this handsome barn had a sturdy skeleton and loads of untapped potential.

There are varying degrees to which old buildings can be saved. Depending on the intended use, most of the structure in question might need to be rebuilt or replaced entirely.  In this case, we opted to keep the overall size and form of the barn including the main structural timbers and original floor/roof framing. But due to the demands of building and energy codes, coupled with the client’s desire to build a low-energy, long-lasting living space, we determined that we would have to demolish or replace the walls, shingle roofing, and foundation. 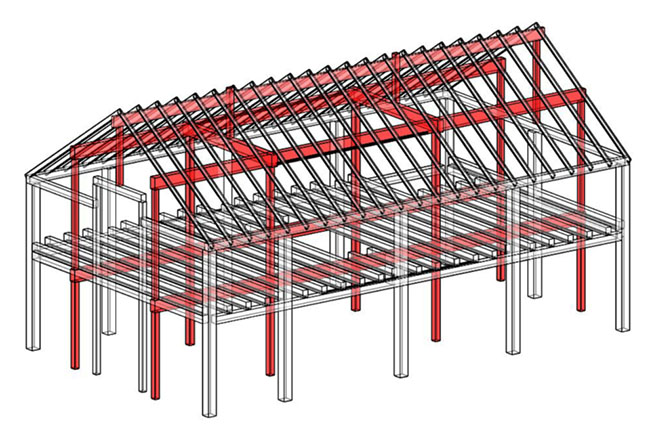 To say the least, these old structures were not built to the specifications of modern engineering. To remedy this, renovations often require an entirely new structure be painstakingly grafted onto each existing framing member, thus obscuring the honesty and craftsmanship of the old building.  However, collaborating with our talented structural consultants, Artisan Engineering, we devised a method that would allow us to keep and ultimately showcase all the existing framing.

A structural scaffolding of engineered lumber will be inserted at the mid-spans of the existing floor joists and roof rafters, while a laminated veneer lumber (LVL) ring will hide in the exterior walls, stiffening the timber frame.  The new structural posts and beams will then be covered with reclaimed boards from the barn walls to match the existing timbers. 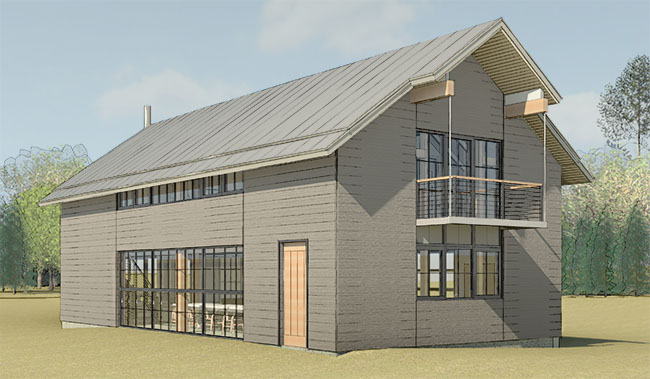 How, then, do we approach the architectural appearance of the rehabilitated barn? One option is to faithfully replicate the original, matching colors and copying or restoring details, memorializing the barn as it was.  Or we could superimpose a more contemporary aesthetic that contrasts with, but respects, the original.

Although we abandoned the classic ‘Barn Red’ in favor of a charcoal grey, we chose to honor the simple, traditional form with a contemporary twist.  Rather than adding onto and complicating the basic volume of the barn, we peeled away layers of the skin to reveal the interior and the structure.  Since walls were being replacing, we had some freedom with where the window and door openings could be, so we decided to get creative with that. Several smaller windows would clutter such a clean little building, so we placed large singular openings on each face of the barn that span over and expose the timber structure within.  On either side of the great room, two 20′ wide glass bi-fold doors will fold up overhead, creating glass canopies and opening the interior to the landscape. 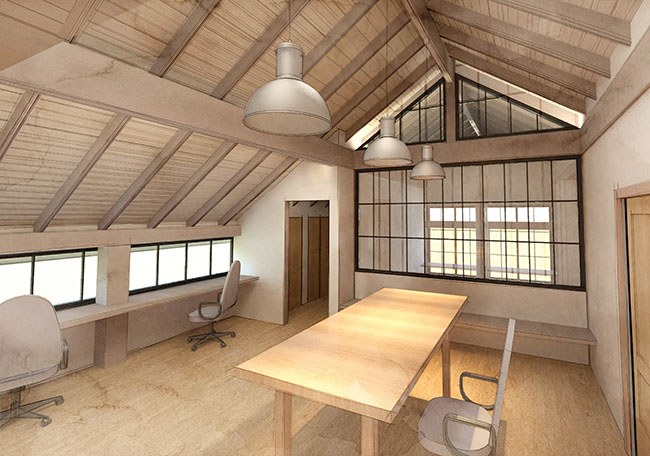 The interior of the barn favors simplicity.  The ground level features an open plan for entertaining, with a spacious, modern kitchen; a cozy den with a wood stove; and a large multi-function space that opens to the main house and the river on either side. The upper level includes two guest suites with interior frosted glass walls, a small bunk room for kids, and a central social area.  The material palette will be light and clean to complement the airy space.  All rooms will have white plaster walls, exposed refurbished timbers and polished radiant concrete floors.

This project is scheduled to be completed in the spring of 2018.  When complete, this old barn will be given a whole new life!