Construction has begun on the future home of Burlington City Arts.  When Memorial Auditorium was closed last year, the BCA was forced to vacate a space they had occupied for decades.  The BCA took that opportunity to plan for the future and bring all of their arts studios together.

Burlington City Arts offers public classes and camps in various media including drawing, painting, photography, clay, printmaking, and jewelry.  Until now, these studios had been located in different buildings throughout the city.  But this summer, all the BCA studios and camps will come under one roof at 405 Pine Street, in the heart of the South End Arts District.

TruexCullins has been working with a team from the BCA and Burlington Department of Public Works for the past 2 years to define their needs, evaluate potential sites, and plan for future growth.  The site on Pine Street will have 7,500 sq. ft. of accessible studio space.

The studios are not architecturally extravagant.  The design team focused on providing for all the basic but unique needs of contemporary art studios.

Indoor air quality was at the top of the list.  Harmful fumes and particles can be produced by the materials and processes of artmaking, so certain ventilation design strategies were used to isolate and capture contaminants at their source.

Access to water is also essential for artmaking.  Adding new plumbing under an existing concrete slab is expensive, so spaces requiring a lot of water were grouped together, while others were designed to incorporate existing fixture locations.

Lighting was a big concern for the art studios as well.  All rooms required ample illumination (except for the darkroom) for the viewing and making of anything from a bracelet to a vase to a digital print.  Though not in the initial phase of work, skylights will eventually be installed to provide each studio with natural daylight.

The new facility will greatly increase the safety and accessibility of BCA’s art programs.  All studios will have the spaces and functions needed to accommodate artists of all abilities.

And finally, BCA needed a space that could easily grow or evolve in the future, while keeping particular studio functions intact.  Certain things like a kiln room and a darkroom are difficult and costly to relocate, so those spaces are fixed while others around them can expand or contract as needed in the future. 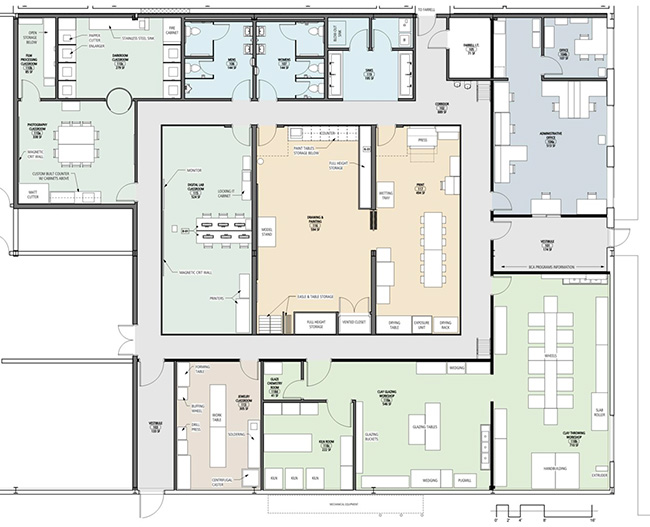 Planning and design have taken the better part of 2 years but construction is proceeding much more swiftly.  Work began in the beginning of February and already demolition is complete.  Just this week, walls have taken shape and one can begin to envision the joyful noise and mess that will soon be made here.  You can check out the new 405 Pine Street Studios at the grand opening in June, and maybe even stay for a class.