Report from Nepal, Part 1: Trekking to the Mountain Village of Basa

TruexCullins recently led a community-wide campaign to support the Edge of Seven and the construction of primary schools in rural Nepal.  We described the challenges facing Nepalese girls here, we explained Earthbag construction here, and we introduced the project at Mankhu Village Farm here.

Our year-long effort came to a close in November, when Diantha Korzun, Sparky Millikin, and Andrew Chardain travelled to Nepal to assist with the construction of one of the classrooms in Basa Village.

What follows is the first of a 3-part series by Diantha, in which she recounts the trek, the construction, and the friendships from this memorable journey.

It has been almost a year since TruexCullins started a campaign to support the Edge of Seven and their projects in Nepal.  As you may recall, our office designed a project on the Mankhu village farm this time last year.  Shortly after, TruexCullins began a fundraising campaign for the Community Development Program for the Edge of Seven.  The funds raised from this campaign, not only went to the Mankhu Village Project but to other projects within the region.  At the end of the campaign, our office raised $20,000! 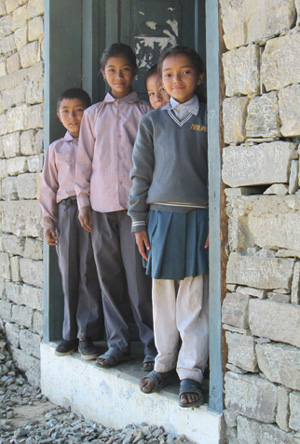 In November 2013, Andrew Chardain, Sparky Milliken and I all from TruexCullins embarked on a trip with the Edge of Seven and a local partner the Small World, to go to Basa Village and build the final two classrooms.  This was a trip of a lifetime, since not only were we going to trek in what I think is one of the most enchanting areas of the world, but we were going to build with natural building materials a school that could greatly improve the lives of others.

The trip really began when our six volunteers left the harmonious discord of the city in Kathmandu and helicoptered into the Phaplu regional airport.  It was a very calm and sunny day in November when we landed and met our guide Dawa Sherpa and three young porters.

From Phaplu, it would be a two day trek to Basa Village.

View of the Everest Region from the Helicopter 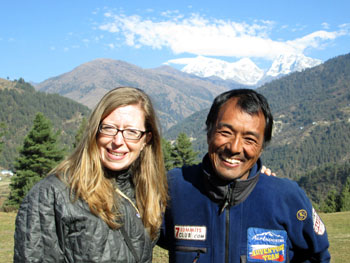 Diantha and Dawa Sherpa, our guide

After the first day’s journey up and over a 10,000 foot pass, we were fortunate to be hosted overnight by the Orggyen Chholing monastery in Mera.  The monastery is nestled high on the hillside.  We approached the last several hundred feet of stairs at dusk and were warmly welcomed by the sounds of chanting prayers by the monks. 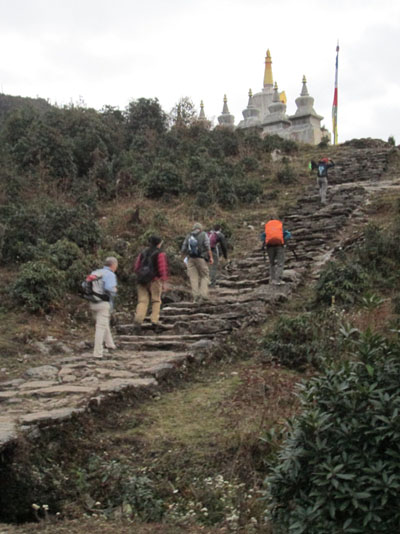 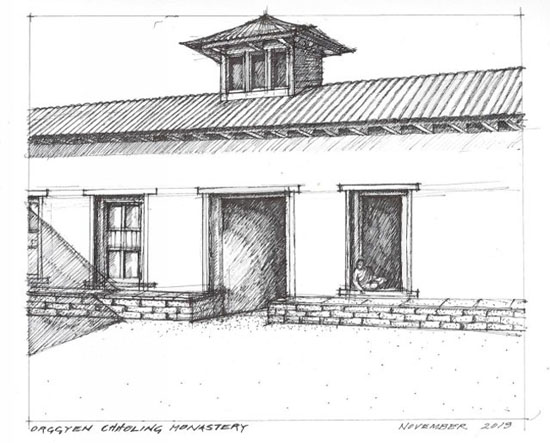 Sketch of the monastery courtyard

After getting a good night’s sleep at the monastery, we trekked into the afternoon of the second day and arrived at village of Basa.  We were greeted by the community where we would be residing for the next week and a half.   They had an opening festival planned, and presented us with traditional dancing and folklore.  It was a real honor to be greeted in such a manner, and an inspiration to begin work on the site since we really had not done anything yet! 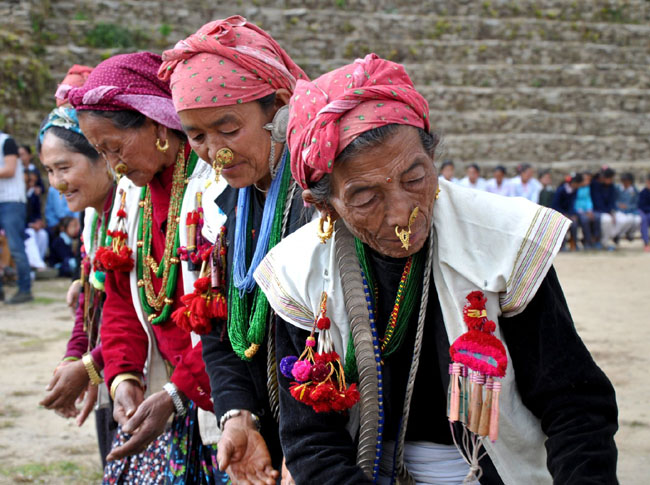 For the next several weeks we would work on the site alongside the superintendent Ram, his skilled group of masons, the community, the students and staff building our school.