The next film in the Architecture + Design Film Series is a compelling story of two designers who moved to a rural North Carolina town and started Studio H, a kind of reinvented shop class that teaches “design thinking”, a specific method of creative problem solving that these 13 students can use to tackle virtually any problem they will face throughout their lives.

If You Build It opened at the IFC Center in New York on January 10 this year, and in Los Angeles on January 24.  It is now screening at select U.S. cities, including here in Burlington, at the BCA Center on February 11.  (Click here for a list of screenings around the country)

Check out the official trailer of If You Build It:

IF YOU BUILD IT (Official Trailer) from OCP Media on Vimeo. 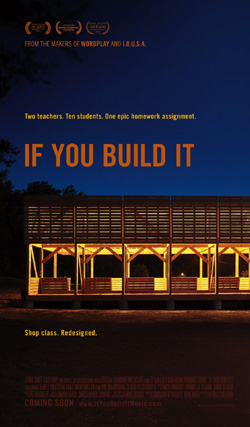 If you Build It

IF YOU BUILD IT follows designer-activists Emily Pilloton and Matthew Miller to rural Bertie County, the poorest in North Carolina, where they work with local high school students to help transform both their community and their lives. Living on credit and grant money and fighting a change-resistant school board, Pilloton and Miller lead their students through a year-long, full-scale design and build project that does much more than just teach basic construction skills: it shows ten teenagers the power of design-thinking to re-invent not just their town but their own sense of what’s possible.

The Architecture + Design Film Series is presented by Burlington City Arts, in affiliation with the Vermont International Film Festival.  The film will be shown on the second floor of the BCA Center on Church Street.  Doors open at 6pm, with free food and a cash bar.  The film starts at 6:30, with a moderated discussion immediately following.

For more info about this series, visit ADfilmseries.org