The next film in the Architecture + Design film series is coming up next Tuesday, November 12 at 6pm.   This time, the focus is on Charles and Ray Eames, two of the biggest names in American mid-century modernism.

Eames: The Architect and the Painter will start at 6:30 on the second floor of the BCA Center on Church Street in Burlington.  As always, the films are free and open to the public.  Arrive at 6:00 for food by City Market and American Flatbread, with a cash bar sponsored by Radio Bean.

For this event, there are a few bonus extras in store:  During the reception from 6 to 6:30, you can watch the 1968 Eames short film Powers of Ten.   And as a special treat,  a Series 1, first production 1956 Eames Lounge Chair will be on display, courtesy of James Kathary and his business modern*love.

After the show, stick around for a moderated discussion on the legendary Eames duo.  The organizers of the film series are pleased to welcome Ross Atwood, great-grandson of Charles and Ray Eames, to join in the discussion.

It should be an exciting night!  Here’s the official summary for the feature film: 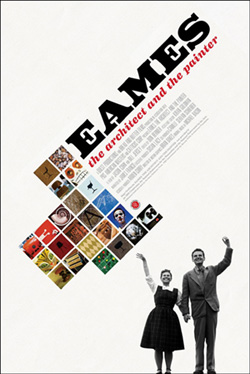 Eames: The Architect and the Painter
Directed by Jason Cohen and Bill Jersey, 2011
USA, 82 minutes

The husband-and-wife team of Charles and Ray Eames are widely regarded as America’s most important designers. Perhaps best remembered for their mid-century plywood and fiberglass furniture, the Eames Office also created a mind bending variety of other products, from splints for wounded military during World War II, to photography, interiors, multi-media exhibits, graphics, games, films and toys. But their personal lives and influence on significant events in American life – from the development of modernism, to the rise of the computer age – has been less widely understood.

Narrated by James Franco, Eames: The Architect and the Painter is the first film since their death dedicated to these creative geniuses and their work.

The Architecture + Design Film Series is presented by Burlington City Arts, in affiliation with the Vermont International Film Festival.

For more info about this series, and to join in an online discussion about any of the films, visit ADfilmseries.org