We just received this message from Rolf, who is travelling through Eastern Europe along the Adriatic Sea. As always, we love reading about the adventures of our colleagues on their global travels, especially when they are to some of the more lesser-known corners of the world.

Rolf writes from a small city in Albania. While visiting the region, Rolf gave a lecture at the University of Polis in Tirana on Making Good Towns, showing examples from Norway, Switzerland and Vermont. 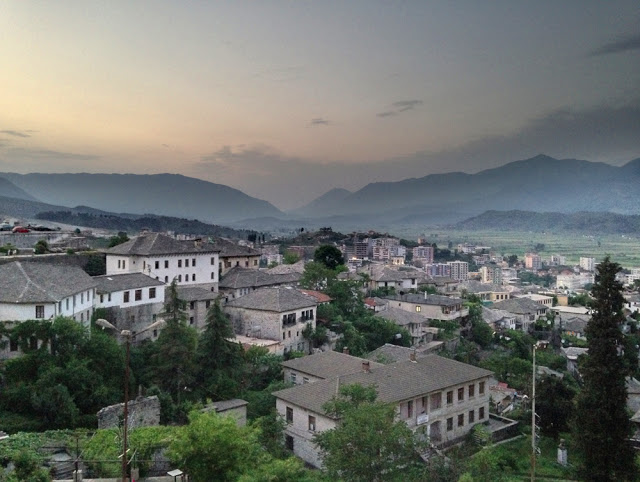 Hi from an obscure but beautiful spot in the south of Albania named Girokaster. A small city notable for its lovely stone houses and also the birthpace of Enver Hoxah, the communist dictator who kept this country closed up like a sturdy closet, for over 40 years.

And all that privacy seems to have made this a weird but still very likeable place . The people are very friendly and curious about visitors. They love Americans and Canadians aren’t far behind it seems. The countryside is beautiful. Spectacular and still snow covered peaks at 8,000 feet. Deep valleys with mountain streams still running clear. Distinct little villages with stone slate roofs … A little too much trash for my liking (ubiquitous little blue plastic bags caught up in the trees standing by the rushing streams) but that seems to be the norm in a place that is still learning how to consume.

The entire country is 200 miles top to bottom (Vermont roughly?) but populated by three million Albanians. A cross of muslim, orthodox and christian faiths, much of which lay dormant during the communist period and perhaps accounting for little in the way of religious strife. Have seen some terrific towns and villages that probably won’t ring any bells. … Korca in the southeast has tight little streets and a pedestrian mall rivaling Church street in Burlington. Some of the most wonderful iconic religious paintings on display here and also in a nearby mountain village named Voscopoja. Also nearby is the stone retreat of Dardha at the end of a perilous mountain road, an isolated little spot that provided refuge from the Ottoman Turks that ruled here for over 400 years.

Shortly after my arrival I gave a lecture at the University of Polis in Tirana. I did the talk on Making Good Towns … In Norway, Switzerland and Vermont. Could include Albania I think.  Now we’re going to tour Girokaster and from there on to Butrimt, a classical and preserved ruin that we were told we shouldn’t miss.