This summer we are working on the interior design for the renovation of a Victorian mansion dating from 1885.  This has sparked our interest in the history of this British-born architectural style.
Most people associate Victorian design with a grand excess of ornament, an arbitrary over-abundance of decoration.  But the real story of Victorian design is much broader and deeper than most people probably realize.  Some even attribute the Victorian era with being the first chapter (or perhaps prologue) to today’s modern design.
The Victorian period is named for Queen Victoria, and coincides with her tenure from when she was crowned in 1837 until her death in 1901.  This was a time of great upheaval, as the industrial revolution brought about major changes to just about every aspect of British life.

If you watched the opening ceremonies of the Summer Olympics from London last week, you probably caught the tribute to the Industrial Revolution, which started in the United Kingdom and eventually spread to the rest of the world.  This was a time of remarkable inventions and engineering marvels.  Architecturally, this technological revolution was evident in structures such as the glass roof of the Crystal Palace in 1854, or the iron spire of the Eiffel Tower in 1889.

But the speed of change during this time is best illustrated by the arrival of the steam train, which gave people the ability to suddenly travel great distances.  As people were exposed to new worlds they borrowed pieces of new and different architectural styles.  This was a period of eclectic design.  Historic styles were mixed with foreign influences, such as neoGothic, Romanesque, Japanese and Egyptian.
These imported styles were used to rebel against industrialization.  With change comes resistance to change, and the resistance to the Industrial Revolution was expressed in romantic or “picturesque” design.  It is this tension between the practical and the ideal which led to some of the best examples of architecture and design of the Victorian era.
The structure that best symbolized this tension between practical, efficient engineering and the romantic ideal of picturesque design was perhaps the Brooklyn Bridge, built from 1870 to 1883.  Its arcing cables speak the language of utility:  machine-made, functional, and efficient.  The neo-Gothic brick piers speak the language of ideal beauty: hand-laid bricks forming lofty arches that evoke Old World cathedrals.
These themes in Victorian architecture applied to all aspects of design: industrial design, furniture, graphic design …  even fashion.  Technological advances in fabrication combined with romantic notions of design in the bentwood chairs by Michael Thonet. 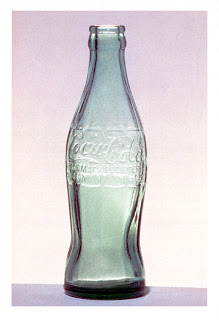 The Victorian curve showed up on everything from typefaces to teaspoons and women’s corsets.  Some of this still lives with us today: the classic Coca-Cola bottle came later, in 1915, but the design was based on this ideal curve from the Victorian age.

The Victorian era eventually led to the Arts and Crafts movement, Art Nouveau, and early modern design. (evident in such pieces as the bentwood furniture of Charles and Ray Eames.)  Even today, when we pick up our iPhone, we are reminded of the marriage between technology and ideal humanist design.  And it was during the reign of a British queen over a century ago that these themes were first born.