One of our recent residential projects has just been published in the latest issue of Vermont Magazine.
“At Home in Vermont” tells the story of how this family’s home began from the small-house plans that Lee and Rolf developed during the depths of the housing crash in 2008.  The design was then tailored to the site and personalized for this client, who wanted an energy-efficient home that could support an active lifestyle. 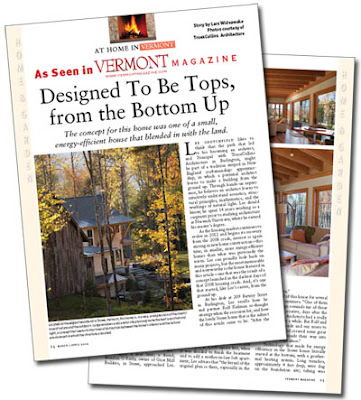 Designed To Be Tops,
from the Bottom Up
The concept for this home was one of a small, energy-efficient house that blended in with the land.
Lee Grutchfield likes to think that the path that led to his becoming an architect, and Principal with TruexCullins Architecture in Burlington, might be part of a tradition steeped in New England craftsmanship: apprenticeship, in which a potential architect learns to make a building from the ground up. Through hands-on experience, he believes an architect learns to intuitively understand acoustics, structural principles, mathematics, and the workings of natural light. Lee should know; he spent 14 years working as a carpenter prior to studying architecture at Norwich University, where he earned his master’s degree. 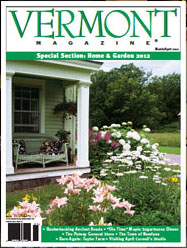 To read the rest of the article, pick up the March/April 2012 issue of Vermont Magazine at a newsstand near you!