There are a wide range of projects at the Solar Decathlon, where schools from 13 U.S. States and 5 countries are each building their own version of the ideal net-zero energy solar powered home.
The houses are built for different climates, cultures, and user groups, depending on the location and type of school competing.  But one thing is common for all the teams:  they have spent a lot of their own energy researching the best products and developing new design strategies for solar powered buildings.  I go to the Solar Decathlon to discover what the future holds, and I found plenty of new green products and design features.  Here are my Top Ten:
1.   Bi-facial solar panels:   These solar panels collect energy from both sides, collecting direct sunlight from above as well as reflected light from below.  It is one of the newest types of solar panels to hit the market, generating up to 30% more power.
The Solar Homestead by Appalachian State University made the most of this technology, with a huge outdoor space covered with a canopy of bi-facial solar panels set within a beautiful wood structure.  Every team distributed “take-aways” or brochures to those people waiting in line to tour the houses, and Appalachian State had a real clever way of tying their marketing materials into the design of the solar array.  Their brochure folded up into an origami hat, with a reflective silver exterior.  As crowds of people walked beneath the bi-facial solar canopy, light was reflected off their silver heads back up to the panels above, generating more energy, potentially pushing Appalachian State over the finish line. 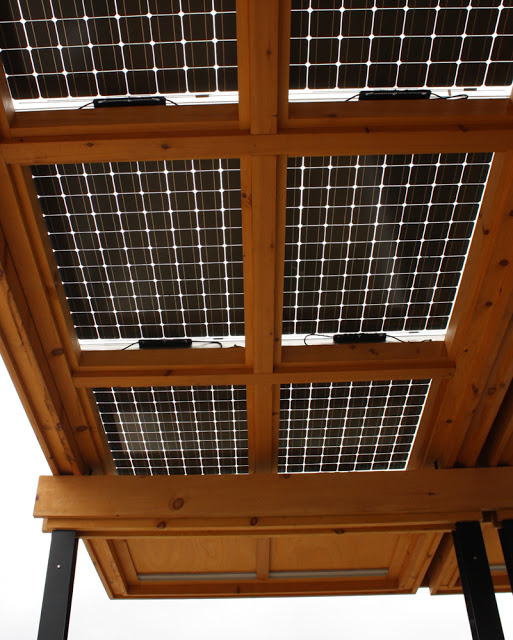 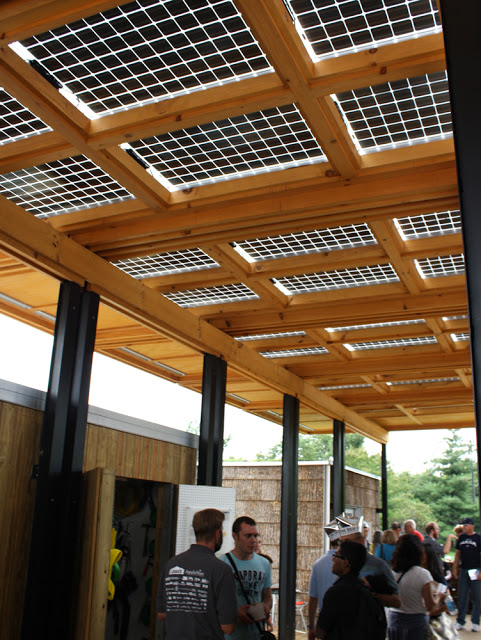 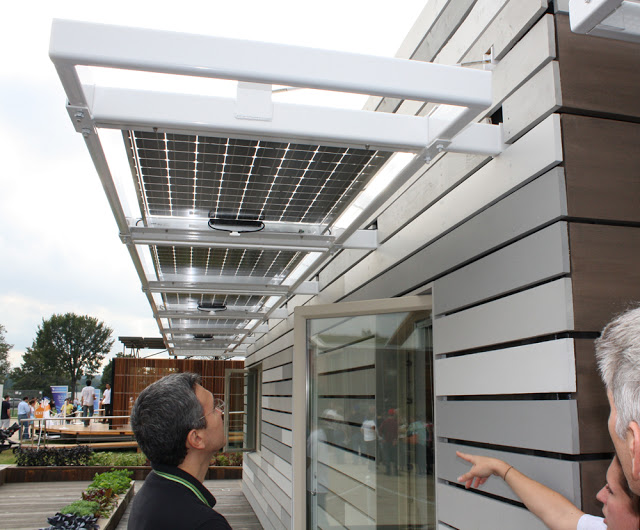 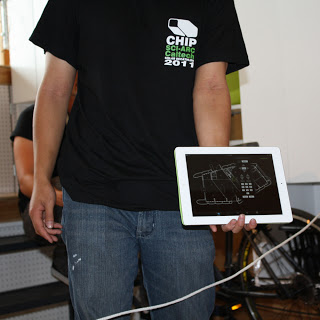 2.   Smart home controls:  It became apparent pretty quickly what really set this competition apart from previous years: the iPad.  Home automation systems were all the rage this year, with iPads, smart phones, HDTVs, and even a hacked Xbox Kinect providing a greater level of control of all the home’s systems.  Many of the teams wrote their own apps, controlling everything from the lights to the heating and cooling systems.  The SciArc/CalTech team developed a system that provided real-time energy use and controlled the shades.  The University of Illinois had a very impressive high-density display that even told you which windows were open. 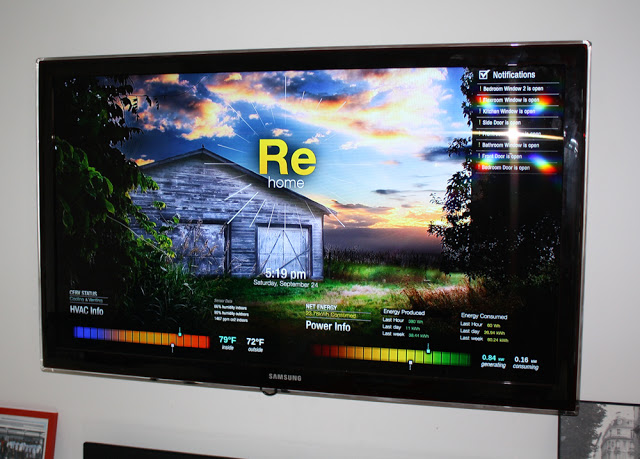 3.   ERVs:  When you live in a very tight super-insulated home, mechanical ventilation becomes necessary to provide enough fresh air to all the habitable spaces.  Energy Recovery Ventilators take the heat energy from the exhaust air (in the winter) and transfers it to the incoming fresh air. (or the reverse in summer)  Most homes in the Solar Decathlon utilized an ERV, instead of the alternative: an HRV, or Heat Recovery Ventilator.  An HRV also exchanges heat energy between incoming and outgoing air streams, but an ERV has the added benefit of transferring moisture in the air.  By reducing the humidity level of the incoming air on this hot and humid September week in Washington, less demand was placed on the air conditioning systems, saving more energy.
4.    Liquid dessicant dehumidification:  A couple of the houses sported decorative indoor water fountains that were more than just pretty pieces of art.  The University of Maryland developed an innovative Liquid Dessicant Waterfall system (patent pending) that uses a high-saline solution to absorb humidity from the air, reducing the load on the mini-split air conditioners.  The transfer of moisture happens vertically within this glass box and is displayed prominently as a design feature in the room. 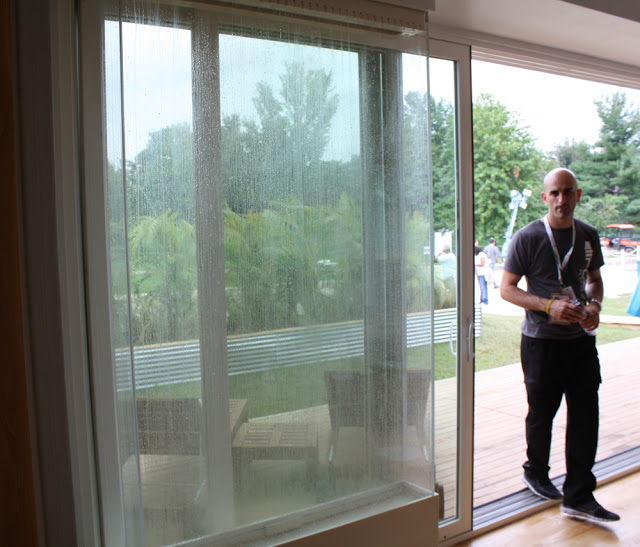 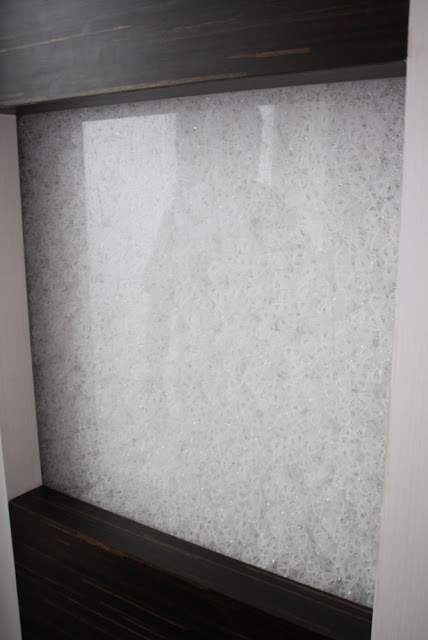 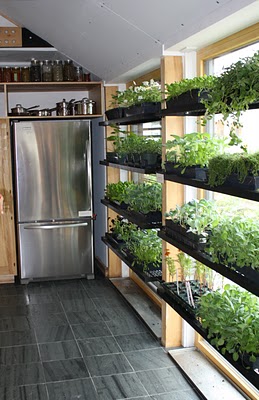 5.   Home-grown food:  Many of the schools explored the true meaning of sustainability by providing a way for their occupants to grow and harvest their own food.  Normally this wouldn’t play into the energy-focused categories of the Solar Decathlon, but this year’s competition included a Home Entertainment category, in which each team had to throw 2 dinner parties for their neighbors.  This was a chance for the teams to show off their home-grown foods.
The New York team oriented its kitchen directly opposite large glass doors that open onto the outdoor roof garden, for easy picking at mealtime. The garden produces about 190 pounds of vegetables, about half of the resident’s annual consumption.
The Middlebury College house features a green wall in the kitchen and outdoor planters for growing vegetables and herbs.  In lieu of a brochure, visitors to the house received a packet of seeds.
The University of Maryland used composted waste as nutrients for food production in their vegetable and vertical gardens.
6.  Phase change materials:  In order to minimize unwanted solar gain, phase change materials [PCMs] are used to store heat energy and slowly release it at night. At the Solar Homestead by Appalachian State University, a modern Trombe wall consists of a plant oil mixture contained in a series of vertical fins.  In the evening, energy stored in these PCMs is released as the wax resolidifies and transfers its heat to the house.
In the mechanical room, phase change materials are also used to capture and store energy from a solar thermal skylight.  The hot water-glycol mix from the solar thermal system runs through tanks of paraffin wax, which stores about 50,000 BTUs of energy.  This setup replaces a traditional water heater. 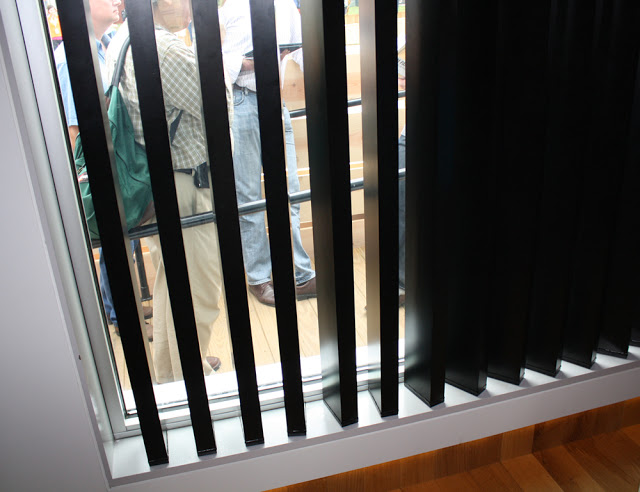 7.   Adaptable furniture:  By the nature of the competition, smaller houses have an advantage because they contain less cubic space to heat and cool.  But each house has to include the required spaces and amenities.  As a result, the students tend to come up with some clever space-saving solutions. We saw sliding walls, pivoting panels, and adaptable furniture.
SciArc and CalTech designed a family of upholstered lounge seating that nests like a puzzle into the wall when not in use.  The University of Tennessee house featured a retractable bed that disappeared up into the living room wall cabinet.  And the University of Maryland house had a dining table that folded open into a bed. 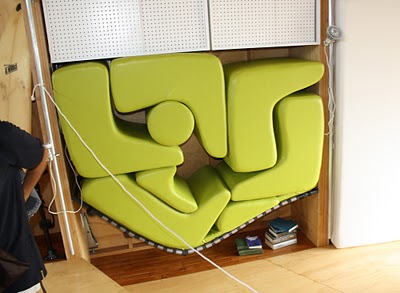 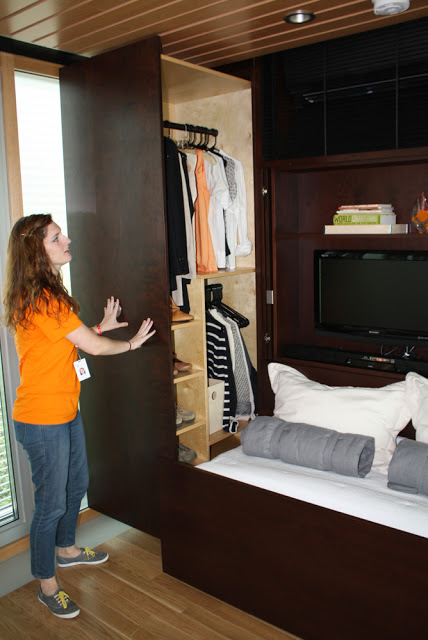 8.   Micro-inverters:  With a solar PV array, an inverter is needed to convert the DC-current that is produced by the solar panels into the standard AC-current that is used in the home. Typically, a single inverter is used with a whole array of panels, but if one of the panels is shaded or dirty, its limited output will be reflected in the whole system.  Micro inverters are used so that each panel can operate at its maximum capacity.  Many of the schools used micro inverters, with one connected to every individual panel.  In this setup, each panel operates at its own peak level.
9.  Water Reuse:  The collection, treatment, and reuse of rainwater and greywater is an important aspect of many of the houses.
The outdoor planters of the SciArc / CalTech house are connected to the greywater system and are automatically watered based on weather forecast data.  WaterShed by the University of Maryland is designed with two sloping roofs that direct rainwater to a constructed wetland, where it is stored and filtered for reuse for irrigation. 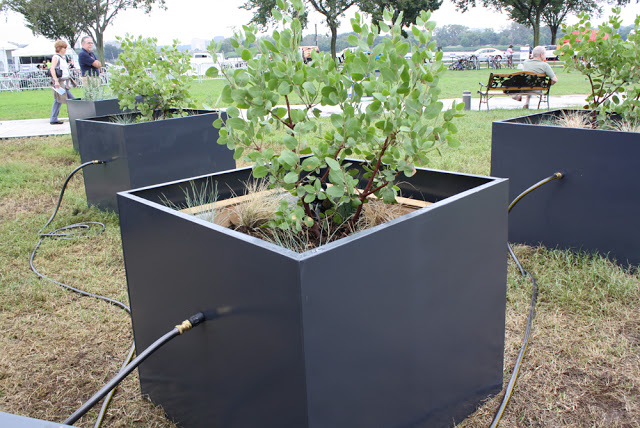 10.PV solar shading:  Rather than being content to apply their solar panels to their roof, some of the teams elected to hold them off the house, creating secondary structures.  The University of Tennessee and Team Massachusetts  both created solar canopies in front of their buildings, which provided a shaded area outside, and cut down on direct solar gain hitting the windows of the front façade.  By removing the PV panels from direct contact with the roof, this also allows for ventilation on all sides.  This keeps the panels cooler and lets them operate more efficiently. 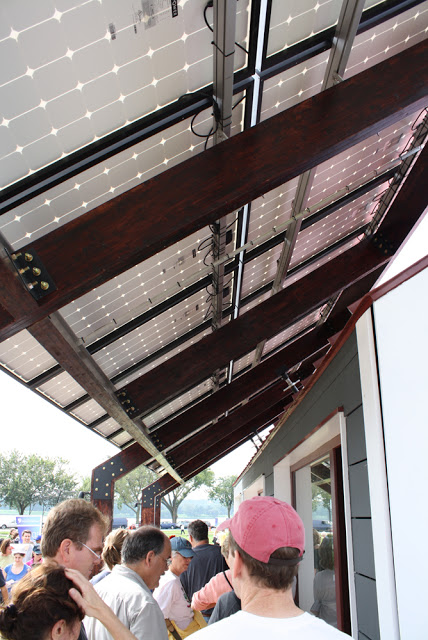 The best houses in the Solar Decathlon incorporated many of these products and features, and did so with consistency, harmony, and beauty.
There are only 2 days left until the final winner is announced.  To learn more about all the teams and follow the current rankings, go to solardecathlon.gov.
Tomorrow I’ll wrap up my review of the Solar Decathlon with a shorter list of my overall favorites.