As most of you are probably aware, at TruexCullins, our work is spread across five distinct studios covering the disciplines of education, workplace, home, resort, and interiors.  But if you were to ask us which one was our primary focus, or even our most favored, I don’t think we could point to any one project type.  Rather, I would say that our best project is the one where we Think Big.This is why I am so drawn to this month’s issue of Architectural Record.  It is the annual Record Houses issue, and it contains a collection of homes so innovative that they remind us how to dream.  The magazine also houses, between its covers, an entertaining war of words among the architectural press.The editors open with an aggressive explanation of their design philosophy that differentiates them from their competitors, in the veiled form of responding to their reader comments and defending their project selection:

We have been asked how occupants perform such pedestrian duties as putting away groceries, making the bed, and cleaning.

(The message here is pretty clear: We are not Dwell Magazine, in which every photo features barefooted homeowners sipping coffee.  They go on…)

We have been advised to refer to Fine Homebuilding for guidance in the residential-project-selection process as well as for edification in terms of addressing our audience.

(I can’t tell which I find more amusing: that the readers of Record made this suggestion, or that the Editors called them out for it.)

This brings us to the cover shot.  Thumbing their noses at their critics, the editors adorned this month’s issue with an unabashedly dangerous house in Portugal by the Lisbon-based firm of Aires Mateus & Associates: 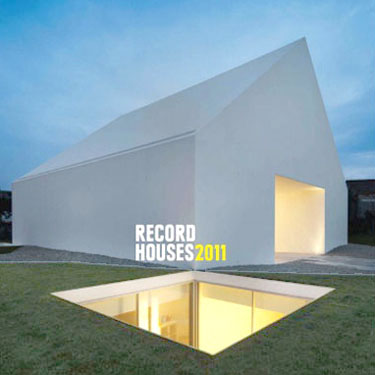 The building is a perfect icon of a house, an oversized monopoly gamepiece bathed in white plaster, roof and all.  And that’s not a reflection you’re looking at.  That’s an open courtyard cut into the landscape: a square pit open to the sky that reveals the subterranean living spaces below.  The article matter-of-factly makes this hilarious mention:

The sunken courtyards at the four corners of the house currently have no railings or covering to prevent people from falling in.

Don’t take me too literally here.  I don’t profess that an open pit of death is appropriate (or even acceptable) for our Vermont landscape.  But in broader terms, this is the kind of thinking we like to start our favorite projects with: pushing the boundaries, thinking out of the box.  Yes, the realities of code compliance and budget constraints will eventually bear down on every project, but if we can start with a kernel of unencumbered inspiration, then we will be more likely to end up with a product that does more than just meet its owners’ needs: it will exceed expectations and answer questions you never thought of asking in the first place.