The Nation’s First Airport Wind Turbine
Today we kick off a 5-part series on one of our most recent success stories.  This is Heritage Flight Week on the Truexcullins blog!  …It’s kind of like Shark Week, only instead of watching Discovery Channel shows on the most fearsome predator of the sea, you will be diving into a new aspect, each day, of the Heritage Flight Aviation facility at the Burlington International Airport. 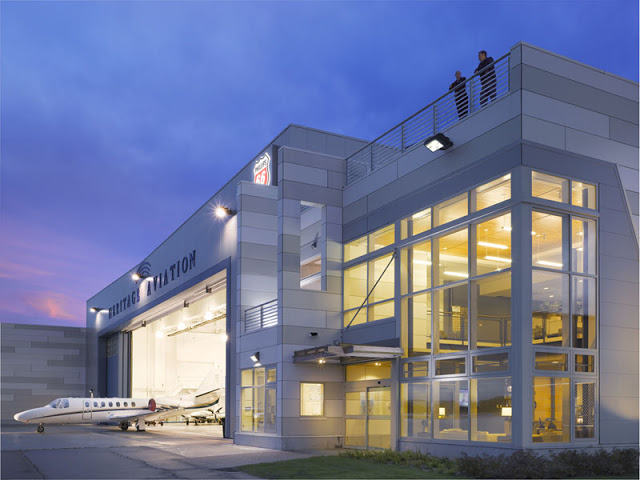 The project started with the complete reconstruction of a vacated 1954 hangar.  The original structure was formerly occupied by the Vermont National Guard and has since been repurposed and transformed into a 75,800 sq. ft. aviation services facility.
The building has been open for about a year now, and we just received word from the USGBC that the project has been officially granted LEED Gold Certification.  This is the first LEED Gold aviation facility of its kind in the country, and as you’ll see over the next week, there are a lot of good reasons why it earned this top prize. 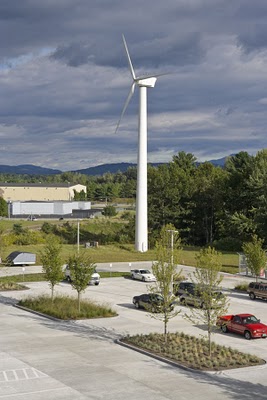 One of the most visible signs of its environmental excellence is the 100 Kilowatt commercial wind turbine standing tall at the southeast corner of the parking lot, with a blade diameter of 21 meters. According to Heritage Aviation, they are generating 15% of their energy needs, saving 200 kW Hours per 10-hour daytime shift every day, with most of that power coming from the wind.

What is most notable here is that this FAA-approved wind turbine is the first community-scaled wind turbine installed at a general aviation facility in the United States. In the past, concerns about possible visual interference with air traffic control or flight patterns may have prohibited the siting of wind turbines at airport locations, but this installation marks a turning point in the attitude toward renewable energy and the acceptance of wind energy technology (at least on the part of FAA regulators).