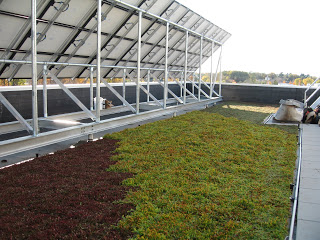 Christopher Hill, president of Heritage Aviation, likewise brought his playful, back-of-the-envelope drawings to the table when he decided to restore a 1950s-era hanger at Burlington International Airport.
As per his specs, a bicycle-friendly path leads to Heritage from Williston Road.
A living, “green” roof planted with sedum (in patterns designed to appeal to airborne viewers) drains to a 35,000-gallon underground tank — and the water is used to wash aircraft.
Aviators might not know to thank a bank of solar hot-water panels for the warm showers.
Motorists will be forgiven if they don’t notice the pebbly, porous concrete parking lot (another stormwater-reduction measure) or the state-of-the-art LED outdoor lights.
But they can’t miss the facility’s 100 kW wind turbine, or the south-facing solar panels.
Hill is “a rare owner,” said architect Richard Deane of Burlington-based TruexCullins.
An early decision: Strip the building (“a rusting hulk,” Deane called it) down to its concrete-and-steel skeleton to preserve structural elements.
“One of the greenest things you can do is not build a new building,” he said.
Read more…